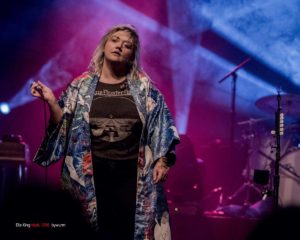 Don’t judge Elle by her sophmore radio hit “X’s & O’s”.   Can’t believe that song was nominated for 2 Grammys – Elle’s music talents go way beyond that song and the State Theater loved Elle this evening.   Elle has a killer trombone player Evan Oberla.  Nice to see a trombone player in a rock band – Evan’s horn is used to accent several of her songs.  Elle’s main instrument is banjo – early influences from Earl Scruggs & Hank Williams are slightly there – what she wants you to hear loud & clear is a bad girl rock & roll.  Her strong vocals, banjo & stage confidence tells you right a way she is not America’s Sweetheart.  Elle uses her banjo as more of a compositional instrument but also plays a nice guitar.  Elle’s voice has this Amy Winehouse thing but this gal still is a pure original.   Elle’s creative talent might come from dad Rob Schneider, SNL writer, actor & old stand up comedian.

Now who would have thought Elle is an ordaned minister?  Her 2016 Ministry tour had an option lle-king-officiate-wedding-tour where fans can request their wedding be performed on stage with Elle officiating.  At the State this evening we witnessed 2 local folk who met in prison, what a great wedding story!  Elle married the couple with good commentary, song and reverence – I’m sure this couple will stay married for ever and ever.  The highlight for me this evening was her “I’m not America’s Sweetheart” I don’t believe anyone was sitting for that song.   Great music, a great show.  Here is a nice collaboration Elle did with the east coast guys hanging out at Daryl’s house.

I’ve worked in healthcare media production for over 20 years. My images of patients & providers is a window to their world often captured at a vulnerable time. As a senior producer, I’ve experienced the insane, delightful but always educational challenges in creating images and stories.